Even as milk production expands seasonally, volumes are tending to run at or below prior year levels. This supports the notion that even though milk prices remain historically strong, the increased pressure caused by rising operating costs gives producers continued margin concerns.

With the Easter holiday around the corner and students enjoying vacations, spring appears to have sprung. Milk production is increasing seasonally as the days lengthen and temperatures warm. In Southern regions of the country market participants report that volumes are nearing seasonal peak levels. However, in the Midwest and Northeast, the peak is likely a few weeks out, as pockets of inclement weather, including isolated snowstorms are extending winter’s grasp. 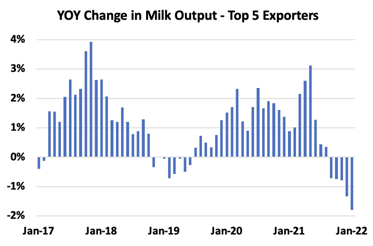 Even as milk production expands seasonally, volumes are tending to run at or below prior year levels. This supports the notion that even though milk prices remain historically strong, the increased pressure caused by rising operating costs has been sufficient that producers continue to have margin concerns. Milk futures prices remain elevated with Friday’s settlements showing Class III contracts through OCT22 at or above $24/cwt while Class IV contracts for the nearby six months all settled above $25/cwt.

In January, milk production among the world’s top five dairy exporters – the United States, the European Union, New Zealand, Australia, and Argentina – was down 1.8% compared to the same month last year.

Despite shrinking global milk supplies, the Global Dairy Trade index fell by 1% on Tuesday, pulled down by price declines for anhydrous milkfat and whole milk powder. This represented the second consecutive auction that the index had declined. While the slowdown suggests that global demand may be starting to show some resistance against higher prices, anecdotal evidence indicates that global demand remains healthy. 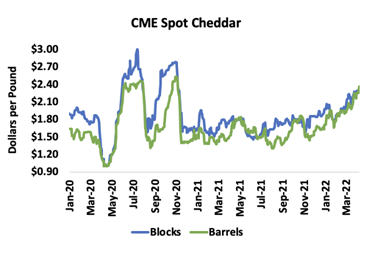 Closer to home, the CME spot market had mixed performance over the course of the week. Cheddar blocks gave up 3.25¢ on Monday before finding some upward momentum on Wednesday and Friday, ultimately finishing the week at $2.32/lb., an increase of 2.5¢ compared to last Friday’s close. Meanwhile, with the exception of a .75¢ decline on Tuesday, Cheddar barrels bounded upward over the week, adding 11.5¢ to bring the price to $2.3675/lb. and inverting the block-barrel spread by the largest amount since midJanuary.

Demand for cheese has been strong from both domestic and international sources, which is working to keep pressure on prices. Cheese exports remain robust with the 72.6 million pounds of cheese 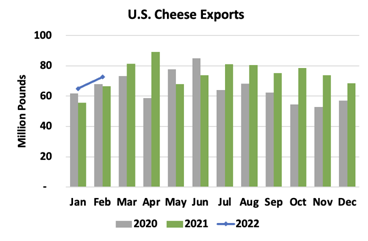 exported in February setting a record for the month. With expanding milk supplies, spot milk loads are readily available but cheesemakers report that persistent staffing issues are preventing them from processing as much milk as they would like.

On the other side of the Class III complex, the spot dry whey market continued to slide on Monday, falling to 59¢/lb., the first time since October 2021 that the price has slipped below 60¢. The dip was short-lived, however. By Wednesday and Thursday, the market was moving back up, ultimately ending the week at 63.5¢/lb., an increase of 2.5¢ compared to last Friday with 8 loads changing hands over the course of the week.

Lighter international interest has taken some of the pressure off dry whey markets. At 102.4 million pounds, February’s whey exports were down 4.2% year over year, due especially to lighter demand from China. Meanwhile, robust cheese production has resulted in a plentiful raw whey stream available for processing. Higher protein products continue to experience strong demand and have demonstrated resilience, even at elevated price levels. 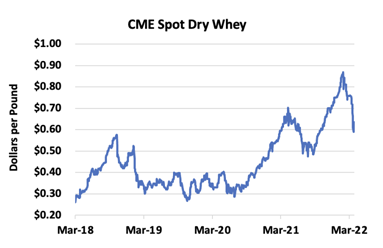 demand from China remained strong, lower demand from other key destinations such as Mexico, Indonesia, and Vietnam pulled the figure downward. Logistical and staffing issues are weighing on NDM production even as milk volumes rise seasonally.

Activity at the CME was mixed for NDM over the week with losses early in the week only partially compensated by gains later on. After starting the week unchanged on Monday, the spot NDM market gave up 3.5¢ on Tuesday and Wednesday, falling as low as $1.815 at the end of Wednesday’s session. Modest gains on Thursday and Friday were unable to overcome the loss and the market closed Friday’s session at $1.8225/lb., down 2.75¢ compared to last Friday. 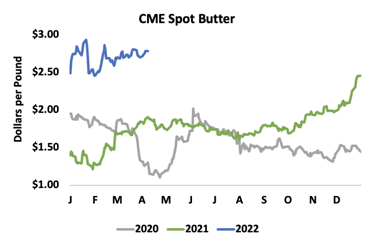 The spring holiday season has ushered in strong demand for butter from both retail and foodservice channels. Furthermore, with summer in their sights, ice cream makers have also started to step up their cream demands. As a result of stronger demand, cream availability has tightened but market participants report that spot loads are still available for those who want them. The strong demand helped to put upward pressure on the spot butter price at the CME this week which added 7.25¢ over the week to end Friday’s session at $2.7825/lb.

The ongoing conflict between Russia and Ukraine continues to wreak havoc on grain markets. In today’s World Agricultural Supply and Demand Estimates report, the USDA further reduced expectations for Ukrainian grain exports, spurring crop futures prices upward. At the conclusion of Friday’s trade, every corn contract until JUL23 settled above $7 per bushel. For soybeans, the MAY22, JLY22, and AUG22 each finished above $16 per bushel.